Finding good Korean BBQ in Los Angeles isn’t that hard. The reason is because if you drive through Koreatown, the smell of sesame, soy, and garlic waft through the air and lures you to a Korean meat-serving establishment. But what’s the best Korean BBQ in LA? The 2nd Annual Korean BBQ Cook-Off answered that question this past weekend.

I took some out of town friends to the cook-off in Koreatown. Close to a dozen Korean BBQ restaurants set up tents so you could eat your way to find the best Korean BBQ LA has to offer for $5 a plate. But before I continue, I want to let you know that Korean BBQ isn’t one type of meat or one recipe or marinade – it’s a variety of meats that are marinated or cook in a traditional Korean way over gas or charcoal grill.

I admit I’m a bit biased because I think my mom makes the best Korean BBQ but I did have my favorite BBQ dish of the day… pork ribs from Ham Ji Park. Take a look at these succulent ribs that are slightly carmelized on the edges and sweet and juicy when you bite into it. 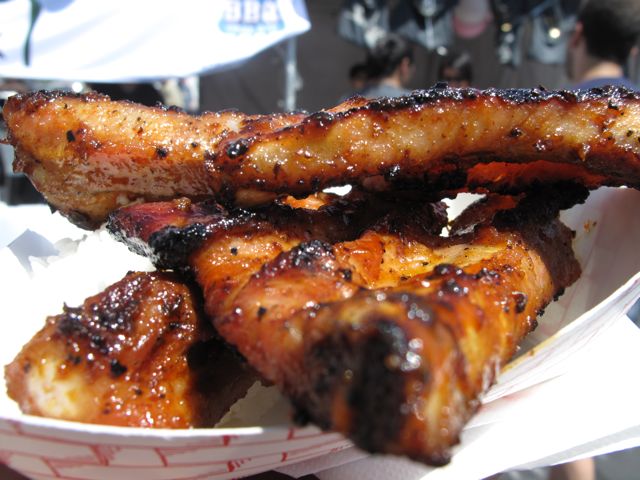 Right before I ate these finger-licking good ribs, I also had the spicey pork bulgogi with a side of rice from Olympic Restaurant. It was a little too spicy for me but I sniffled through it because it was too tasty to pass up. By the way, if something is too spicy, don’t drink water… eat more rice or drink dairy. It definitely helps!

In between all the BBQ tasting, we had some non-BBQ items like these sticky rice seaweed wraps. I admit I wanted to save room in my stomach for the meat so I just took a bite of the spicy tuna.

For those with a sweet tooth, dessert food trucks like Sprinkles cupcake mobile were serving up cupcakes in individualized cupcake boxes.

Also, I can’t forget the Cool Haus truck! Check out this guy’s Thai iced tea ice cream and lychee ice cream with brioche and chocolate chip cookie dessert… and yes, that’s all in just in ONE dessert pictured below.

But you’re probably wondering – Angela, who won!!!??!? The winner the judges chose for the best BBQ went to Park’s BBQ. 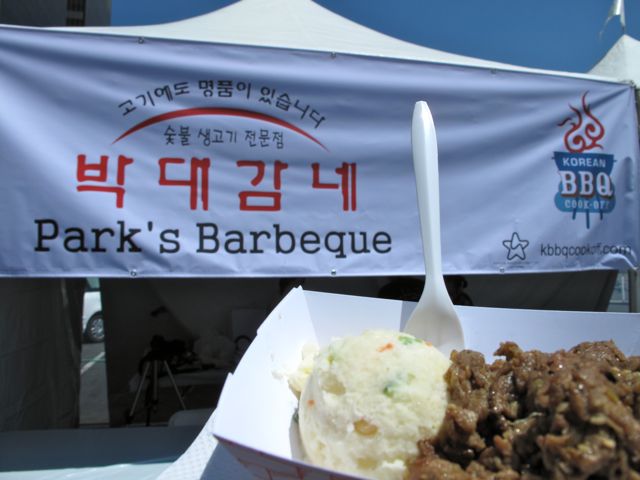 I had their bulgogi which was tender and perfectly marinated – sweet enough for the flavors to sit on your lips for you to lick and want to take another bite. The meat was served next to a potato salad which was basically foreplay for the BBQ – in my opinion.

Congrats to all the winners and also all the vendors who endured the heat and crowd to bring good food to the people. Can’t wait for next year!