Ever have those meals where you look across the table and wonder to yourself “Why didn’t I order that?” That was me when I went to dinner at First & Hope Supper Club in downtown Los Angeles during Dine LA a couple months ago. It’s as if every dish I ordered was slightly off or below average to my dinner companion’s choices.

He chose the modern waldorf salad with pear and walnut. It was simple, clean, and refreshing – a nice way to start the meal. The dressing was a light vinaigrette which is a bonus in my book.

I ordered the crab cakes with blood orange and fennel – big mistake. It’s one of the few times where I couldn’t even finish my appetizer and my dinner companion didn’t want to finish it for me. The crab cakes were undercooked and it didn’t taste fresh. It wasn’t seasoned well – I fell like it needed more acid to bring out the flavors because I could barely tell there was blood orange flavor on my plate – flavors were dull.

For the main dish, he ordered the braised beef and potatoes. The meat fell right off and the au jus was great for the potatoes to soak up.It was a simple dish done well.

I figured you couldn’t go wrong with fried chicken at a supper club – I was wrong. The mashed potatoes and gravy gets a thumbs up but the biscuit and fried chicken didn’t fare so well. The biscuit was too dry – I admit at some point, I blurted out that I wished I had a Kentucky Fried Chicken biscuit (and chicken) instead. The crispy fried chicken skin was under-seasoned – I added salt hoping it would add some flavor to no avail.

And of course to keep the unfortunate theme going, I ordered the forgettable dessert: red velvet with cocoa bits and frosting. Did the chef just give up on this dish? I think I could make a better red velvet from a boxed cake mix. The cake was heavy and lacked the subtle cocoa flavors that red velvet is known for. The way the frosting was laid out on the plate didn’t look appetizing. It looked as if someone just squirted the frosting and threw on some cake bites they bought pre-made at the market. I took a couple bites and didn’t finish this dish – such a shame because I love red velvet cake. 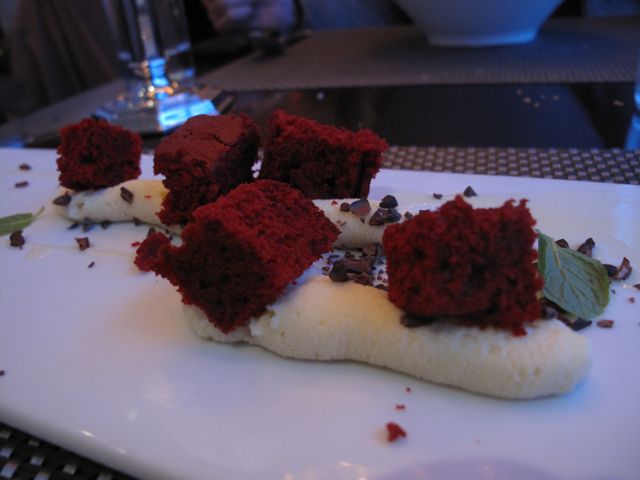 I admit the decor in the restaurant and bar and presentation of the food were memorable but I was disappointed with the lack of consistency. I think my dinner partner ordered well and if I copied him, this review would have had a different tone. However, don’t you think every item on the menu should be something the restaurant believes in? My advice if you go to First & Hope, follow the masses and order the meat and potatoes and don’t expect many surprises.