This post highlights one of the dishes I talked about last weekend on public radio’s Splendid Table. The theme was cold eats in Los Angeles and one of the dishes I highlighted is the Korean dish called mul naengmyeon [pronouncer: mool nay-ng-me-yuhn]. It’s basically buckwheat noodles in a cold beef broth soup with a tangy flavor (vinegar and a little sugar) served with julienned cucumbers, sliced beef, sliced Asian pear, and a hard boiled egg. 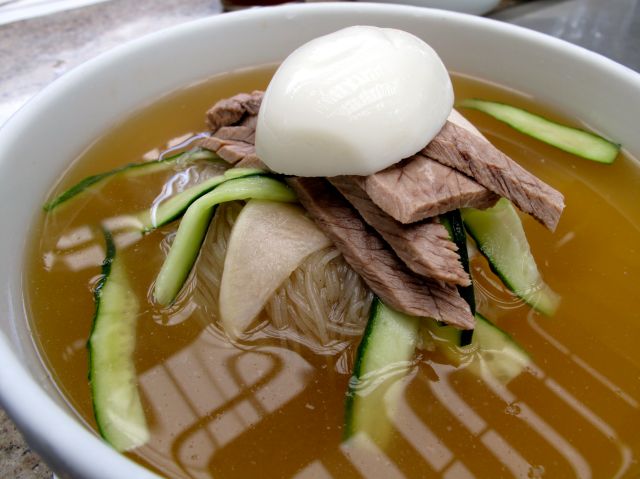 It’s a light (but filling) noodle dish that’s perfect for the summer. A lot of people may not realize this but mul naengmyeon’s origin is actually from North Korea and it became popular after the Korean War. The noodles are intentionally long because it represents long life but most restaurants will cut the noodles so it’s easier to eat. If you go to a mul naengmyeon restaurant, don’t be surprised by all the slurping noises because that’s the only (and best!) way to eat the dish and show your appreciation for the food.

The mul naengmyeon in this post is from Chosun Galbi in Koreatown. They serve banchan (Korean side dishes) with the noodles and the best part is they have a nice outdoor patio where you can dine – perfect for a summer afternoon lunch. 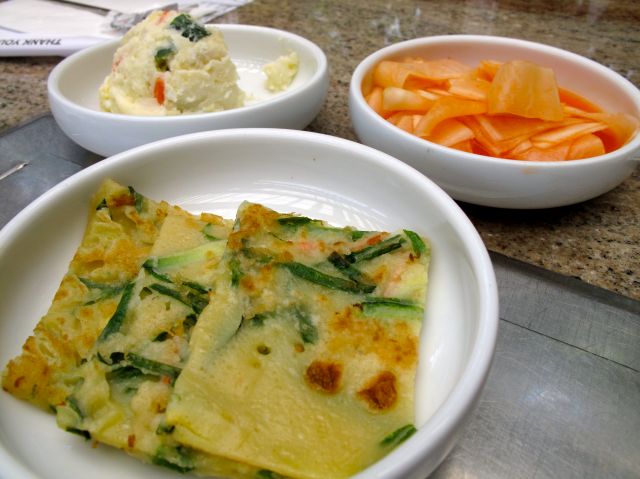 I think the best mul naengmyeon I had was in Seoul last year. Why? The broth. It was the perfect balance of savory, tangy, and sweet. I’ll try to post it later so you can compare.

Note: If you like spicy dishes, there’s also another variety of naengmyeon called bibim naengmyeon which is served in a red hot spicy dressing instead of a broth.